Famicom Mini Weekly Shonen Jump 50th Anniversary Version is all about manga anime games, but that could spell disaster for North America.

Almost as soon as Nintendo released the NES Classic Edition, the miniaturized stand-alone console preloaded with iconic video games from the company’s 8-bit era became impossible to find. The mixture of nostalgia and genuinely still fun-to-play titles was too strong for anyone with even a passing interest in the hobby to resist, and retailers sold out immediately.

Since then, fans have been pleading for Nintendo to make another batch, and the company promised that it will sometime this summer. Aside from that, it was quiet on details, but the list of games that will be included in the new mini Famicom for Japan, as well as when it’ll go on sale and how much it’ll cost, have finally been revealed. 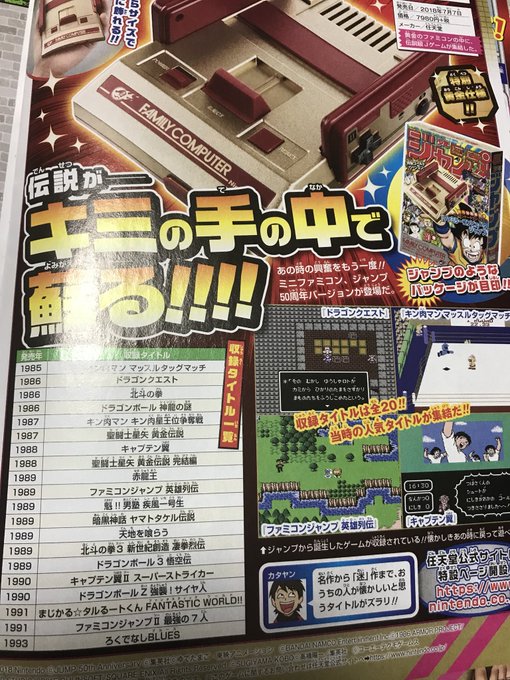 While flipping through the most recent edition of manga anthology Weekly Shonen Jump. Japanese Twitter user @zaregoto_od3 came to a page boldly proclaiming “The legend returns to life in the palm of your hand!” But rather than just re-release the same Nintendo Classic Mini: Famicom that it did in 2016, Nintendo is instead loading it up with 20 completely different games, all of which are based on Shonen Jump manga (yes, there was a long-running manga adaptation of Dragon Quest).

Aside from the anime/manga connection, a couple of things stand out about the list. First, while the game rosters of previous Nintendo mini consoles have been heavy on first-party titles, the Famicom Mini Weekly Shonen Jump 50th Anniversary Version (to use its full name) doesn’t include any games made by Nintendo itself.

What’s more, while some of the games had renamed and/or graphically reworked releases in North America (such as Kinnikuman Muscle Tag Match as Tag Team Match: M.U.S.C.L.E., Dragon Quest as Dragon Warrior, Captain Tsubasa as Tecmo Cup, and Tenchi wo Kurau as Destiny of an Emperor), many of them were exclusive to Japan, and even those that did cross the Pacific are remembered by few American gamers, and remembered fondly by even fewer.

▼ Dragon Warrior was so unpopular that Nintendo, the game’s North American publisher, eventually resorted to giving away free copies of it with subscriptions to its Nintendo Powermagazine.

Because of that, it’s likely that there will be little, or perhaps no, overlap between the game lineups of the second-round Japanese mini Famicom and North American NES Classic. Sure, Dragon Quest might make have a spot in both, thanks to its historical significance, but the Famicom’s Magical Taruruto-kun and Rokudenashi Blues aren’t really remembered for their gameplay, and with their American fanbases small enough to be virtually nonexistent, there’s no nostalgia boost for them or many of the other franchises represented in the Famicom Mini Weekly Shonen Jump 50th Anniversary Version.

So now the question becomes if few to none of these games will be in the new mini NES, what will? Nintendo titles seem like they’re out of the running, especially since the company is using access to them sweeten the deal for its Switch Online service, which launches in September, which makes another “themed” collection seem likely.

Just what would that theme be? “Sports” could be a candidate, since games like Tecmo Bowl and Blades of Steel were big hits with America’s sizable football and ice hockey fandoms.

But the far more horrifying possibility is that Nintendo will come to the conclusion that if Japan is getting a bundle of anime/manga games, then North America should get an NES Classic with a collection of licensed games based on Hollywood movies. Just imagine a new mini NES that forces you relive the sloppy, obtuse, and repetitive game mechanics of Back to the Future, Jaws, and Predator!

But hey, at least when you get fed up and angry with them, smashing the hypothetical “NES Classic Hollywood Edition” would let you destroy them all at once.

Previous The incredible story of Nintendo back on time
Next Tokyo International Shark Film Festival (TISFF).

The incredible story of Nintendo back on time

Now one of the most influential firms in the video game industry, few know of the …